Have you ever smelled weed that had a spicy kick to it? A bit of a budacious bite? A slight sting when you sniffed at it?

If so, you’ve likely gotten a whiff of caryophyllene. Caryophyllene, or, more specifically, β-caryophyllene, is one of the most common terpenes found in cannabis. While most folks may distinguish caryophyllene from the other terpenes based on its spicy qualities, it’s also responsible for making certain sweet, candy-like strains resemble tropical fruit or baked goods. 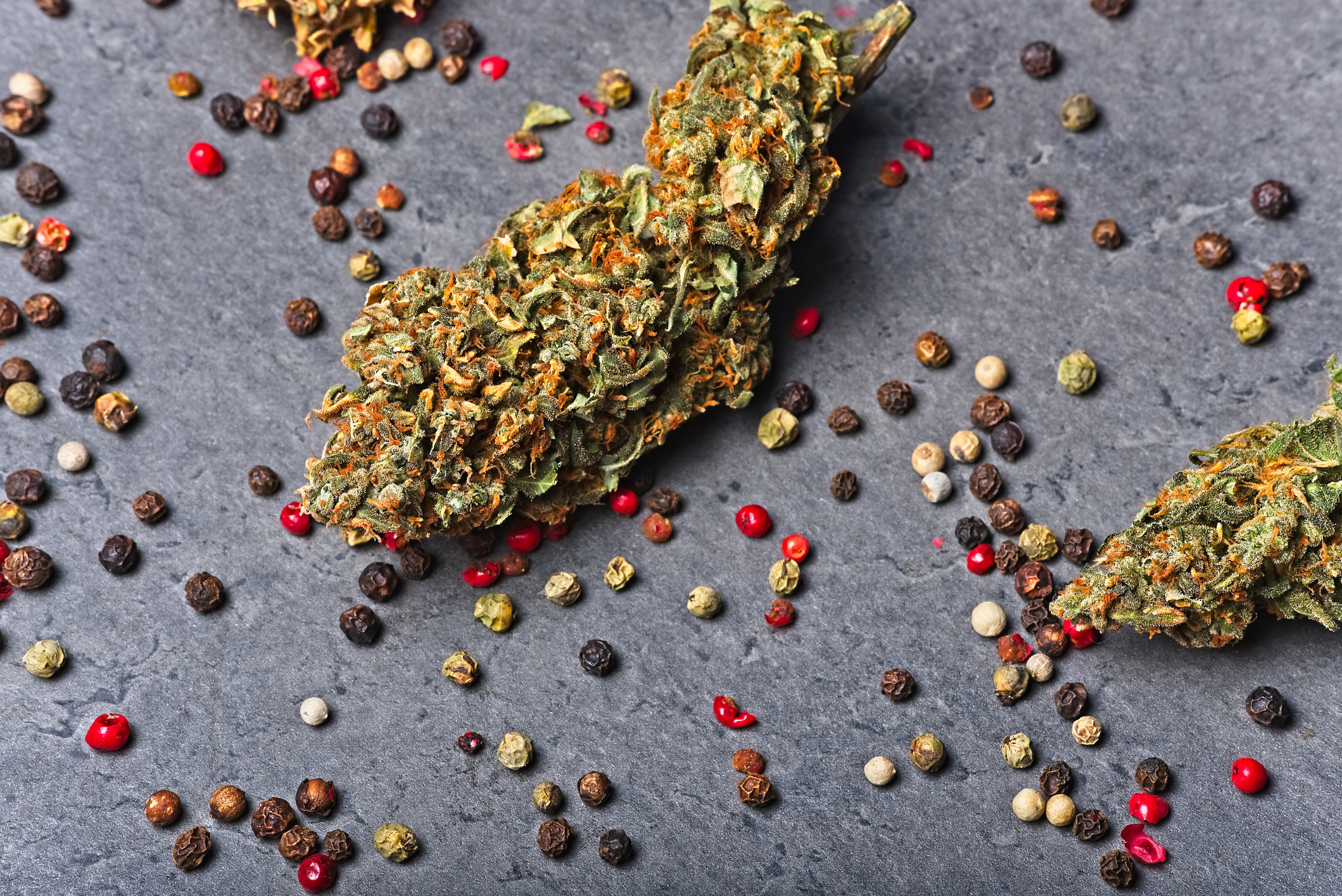 Are There Any Health Benefits with Caryophyllene?

Does β-caryophyllene do anything else besides helping bud smell abso-fuckin’-lutely delicious? Yes, the terpene can confer some health benefits; it’s even listed as a “nutritional terpene,” meaning it’s a terpene found in weed that still works its magic after being eaten. But keep in mind, most of the properties listed below come from studies where smoking caryophyllene was not taken into account, so no one can guarantee these same effects will translate when, say, blazing some uber-dank through a blunt. Instead, these studies rely on caryophyllene’s effects in oils or when inhaled as a vapor.

One of caryophyllene’s most impressive — though not entirely surprising — properties is its ability to fight cancer. Studies have shown that this terpene can cause cancer cells to become more sensitive to cancer-fighting drugs, potentially improving a patient’s chance at survival. Caryophyllene can also arrest the growth of certain cancer cells, such as those that originate in the prostate or breast, too.

Caryophyllene is also a potent analgesic, meaning it acts as a painkiller, as well. Clove oil has been used by humans to treat tooth pain since antiquity, and β-caryophyllene is one of the reasons why. The terpene also possesses anti-inflammatory properties, which can contribute to keeping cancer at bay while controlling pain at the same time. In fact, practically anything that can tamp down our inflammatory responses could also contribute toward improved brain health and slowing the degenerative effects of aging.

When inhaled as a vapor via aromatherapy, some studies suggest that caryophyllene can reduce anxiety and contribute to better sleep. And here’s an especially fun one: Mouse studies indicate that inhaling caryophyllene vapor can burn off body fat, which may partially explain why weed smokers experience lower levels of stress and boast slimmer waistlines than non-tokers.

And while scientists are still figuring out why people experience different kinds of weed highs from the same flower, β-caryophyllene’s anti-anxiety effects may explain why some people can “come down” after eating raw black peppercorns. The idea is that if other plant compounds can interact with the same brain receptors that are responsible for our cannabis high, then ingesting those compounds can “take the edge” off of consuming too much THC.

Which Strains Have Significant Amounts of Caryophyllene?

However, new strains hit the pot shop shelves all the time, and not every state requires weed labels to include terpene contents. Train your nose to smell caryophyllene: If your cannabis smells incredibly sweet, fruity, spicy, or peppery, it’s likely got caryophyllene in it.

What Other Fruits, Vegetables, and Herbs Contain Caryophyllene?

If you’re looking for other sources of caryophyllene to supplement your diet of dank, check out black pepper, cloves, basil, hops (beer!), oregano, cinnamon, lavender, and rosemary. Again, if you want to train your nose to sniff out this terpene, try sampling some of these other plants instead!

What Is Caryophyllene and What Makes This Weed Terpene So Special?