But we live in the “green age,” and rolling joints is an entirely different experience now. In fact, the whole accessory game in 2020 makes smoking weed chic— and simple. While V Syndicate continues to revolutionize the cannabis accessory realm with grinders, storage containers, and more, the company has also notably elevated the glass rolling tray game.

We love rolling our weed on glass surfaces, which we recognize is a personal preference. But, there’s a distinct functional elegance about glass that we’re drawn to. Not only is it easier to clean, but using glass in the joint rolling process adds an extra level of sophistication to the entire process.

Of course, glass also comes with its own drawbacks. For instance, glass breaks easily. Of all people, we know from experience—few things sting like the buzzkill of breaking your bong or a glass of liquid while you’re stoned. But, no such danger exists with V Syndicate glass rolling trays. They are made out of tempered and shatter-resistant glass. So, they’re designed to hold up on impact. 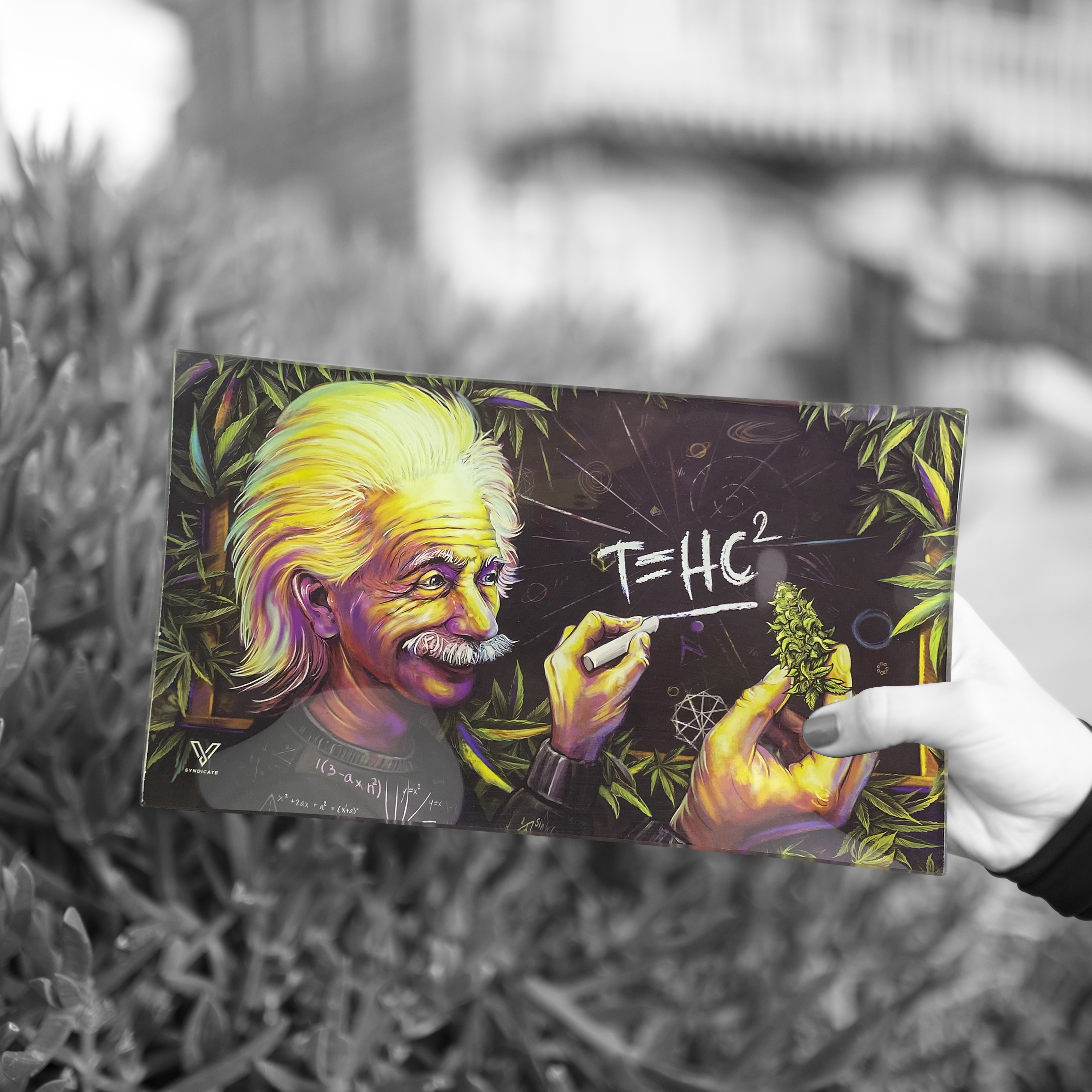 And we’ve tested it! In a stoned haze we knocked our T=HC2 Einstein tray off our couch last week, and it hit the floor—hard. But, to our surprise, it landed and sustained no damage. We learn by doing here at MERRY JANE.

The strength and durability of V Syndicate’s glass rolling trays make them safe to pack up and carry around with you as portable rolling stations. They come in an array of sizes, too, to fit any lifestyle.

The problem with glass rolling trays is that they’re typically expensive as hell. Why would you spend money on an expensive rolling tray when you can use that money for weed—and food—you know? Thankfully, V Syndicate glass rolling trays are insanely affordable. The small ones cost $19.99, while the medium editions go for just $25. 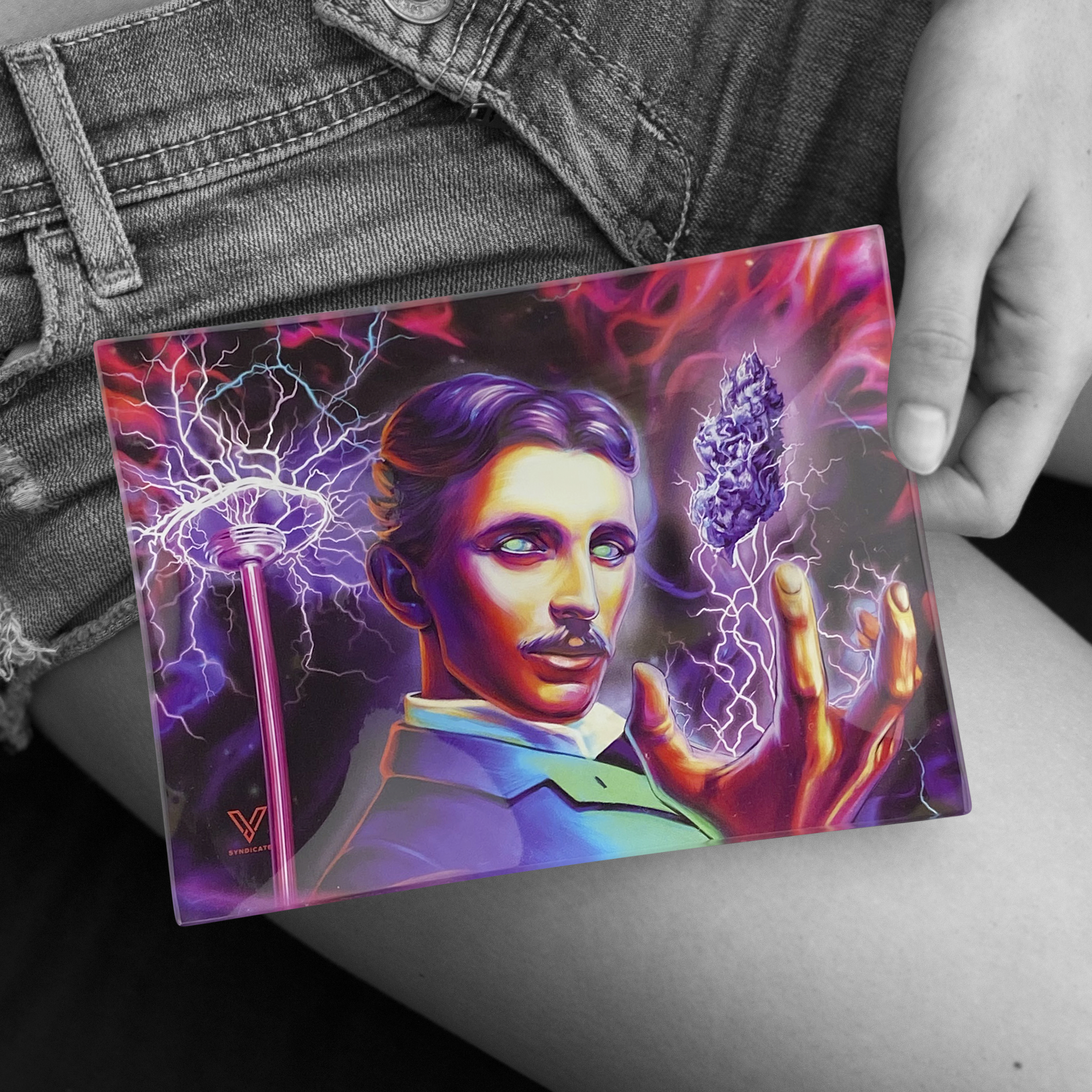 The Einstein tray we mentioned earlier is just one in a series of V Syndicate’s homages to the master of consciousness expansion. The company also offers Einstein Black Hole rolling trays and Einstein Higher Education trays, too.

While you can always buy V Syndicate’s products for individual use, the company also sells in bulk to smoke shops — and they offer every collection for wholesale. That means your shop can be filled with lions, tigers, and buds in no time. If you want to take it a step further, V Syndicate can even customize and create private label glass rolling trays specifically for your brand.

However, our personal favorite of V Syndicate’s line of glass rolling trays are the company originals. We love rolling with Cloud 9 Chameleon and Pussy Vinyl, which are also available as glass ashtrays! They’re also just as shatter resistant as their larger counterparts and ensure that every sesh is executed in style.

V Syndicate continues to lead the pack in cutting-edge smoking accessories. And, the fact the edges of these dope glass pieces won’t cut you is only one aspect of what makes these new wave rolling trays absolute must-haves.

*This was made in partnership with V Syndicate

We Rolled a Ton of Joints on V Syndicate’s Glass Rolling Trays and There’s No Going Back
WEEDGANGSTA Power Share: