When news of a rash of lung injuries caused by vaping broke at the end of last summer, officials at the Centers for Disease Control (CDC) and health agencies in several states quickly took notice and went into action. In case after case, people were hospitalized with difficulty breathing, shortness of breath, and sometimes chest pains. Many also experienced gastrointestinal distress similar to the flu, including vomiting and diarrhea. Some patients required the use of ventilators or medically-induced comas to keep them alive. Others weren’t so lucky. By September, eight patients had died, their deaths attributed to what is now known as EVALI, or e-cigarette or vaping product-use associated lung injury.

As of January 7, a total of 2,602 people have been hospitalized for EVALI across all 50 states, the District of Columbia, Puerto Rico, and the US Virgin Islands, according to CDC data. A total of 57 patients in 27 states have died. Of the 1,979 hospitalized patients for whom the CDC has substance use data, 82 percent reported using THC vape products. Among them, 84 percent said that they acquired THC vape products such as cartridges from friends, street dealers, and unlicensed dispensaries.

What is the cause of the vaping epidemic, and how have health officials and the cannabis industry responded to the crisis as it’s evolved? The answers are myriad. 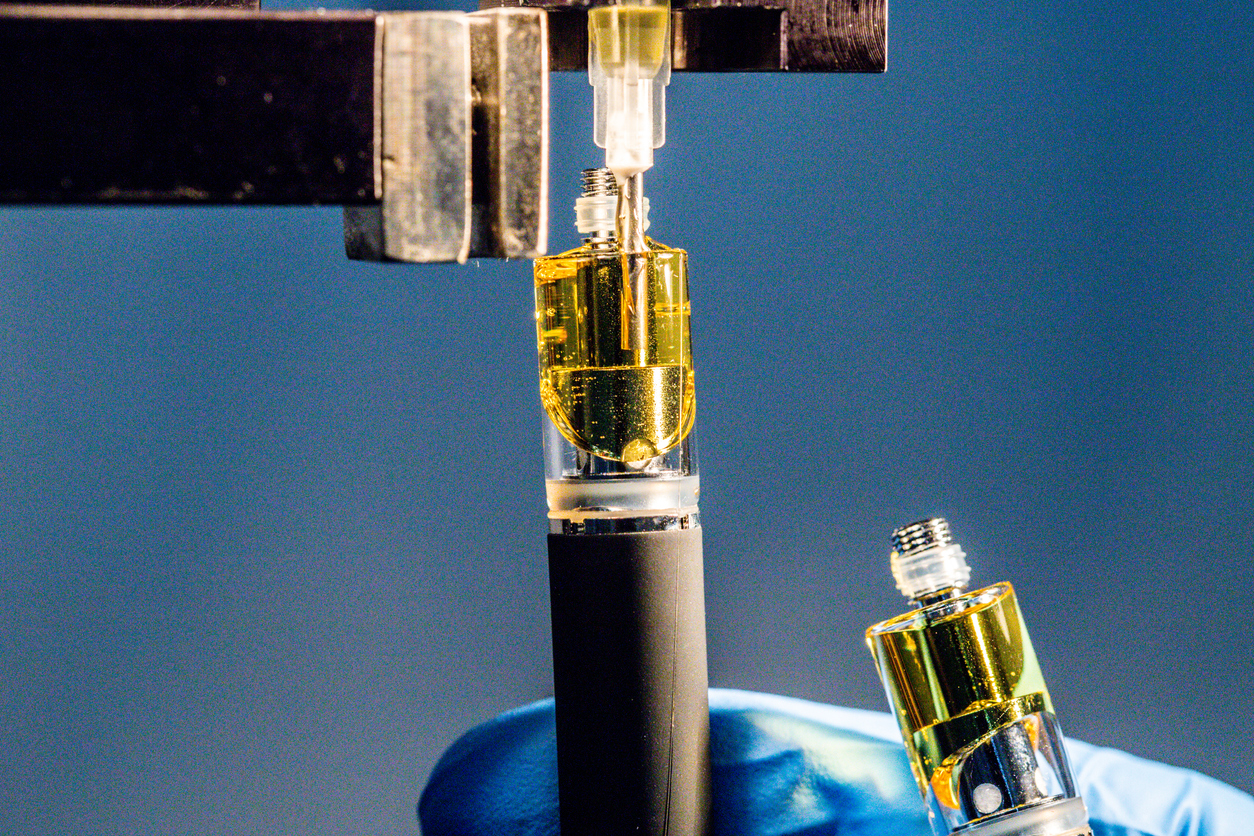 Investigators Zero-In on Potential Cause

Investigators at the CDC and state agencies have scrambled to determine the cause of the injuries and, in September, the New York Department of Health announced that it found vitamin E acetate, a synthetic form of the nutrient, in vape cartridges it tested.

When used as an oral supplement or topically in personal care products, vitamin E acetate, also known as tocopherol acetate, is generally considered safe. But when it’s inhaled, it can coat the lungs with an oily residue and cause difficulty breathing. Although other potential causes are still being explored, such as heavy metal contamination, the CDC confirmed in November that the substance was a likely culprit responsible for EVALI after it was found in lung tissue samples from all 29 patients from 10 states that had been tested.

Health officials, however, weren’t the only ones eager to find a cause for the mysterious lung illnesses. When vitamin E acetate came under scrutiny, licensed cannabis companies that hadn’t been adding it to their products, including Bloom Brand in California, saw a way to distance themselves from the spate of respiratory illnesses. With consumers throughout the nation concerned about the safety of vaping products, Bloom’s sales of cartridges plummeted by about 25 percent in October, according to Casey Ly, the company’s chief revenue officer.

Bloom worked to respond quickly to the crisis, he said, “because we wanted to make sure that people understood what was the cause of the issue and how it was unrelated to us. So, we’ve been very active in terms of social media, our website,” media interviews, and so on.

Ly explains that licensed brands don’t use additives like vitamin E acetate to dilute their cannabis oil because it would reduce the potency of their products. 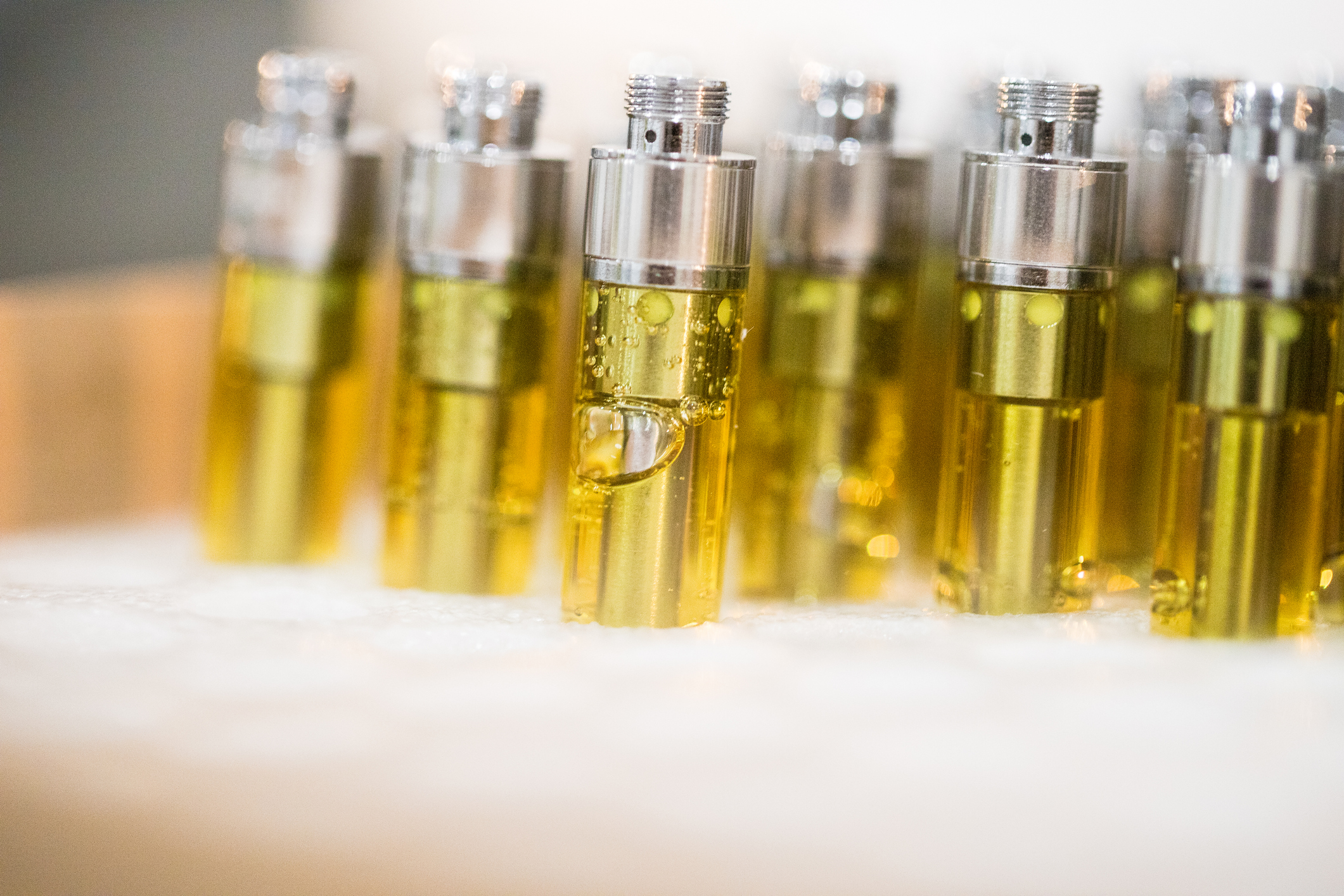 Joe Wynne, the vice president of sales of Sisu Extracts, agreed, asserting emphatically that “there’s really no place for it in our market.”

Sisu, which has the first permitted volatile extraction operation in Humboldt County, produces approximately 20 percent of the cannabis distillate for California’s legal market and supplies brands throughout the state.

“Vitamin E acetate is used as a cutting agent, much like you’d see in a lot of other black market activity,” Wynne added. “If they have one jar of oil, then they mix in vitamin E acetate and make it into two jars. The big trade-off there is now the potency has dropped from 90 percent [THC] oil to 45 percent, and in the legal market, you won’t survive if you’ve done that because potency is the primary driver” of sales.

Wynne said that Sisu also saw a drop in sales during the height of the vaping crisis, as retailers and brands depleted on-hand inventory in preparation of a vaping ban that was proposed in several states but never materialized in California. It didn’t take long for sales at Sisu to bounce back, though.

Wynne believes that the CDC is right about vitamin E acetate being responsible for the EVALI outbreak, and lays the blame squarely at the feet of unscrupulous black market operators.

“It’s literally people who are trading other people’s health for money, and I think it needs to be rooted out and eliminated,” he told MERRY JANE in a phone conversation.

To protect public health, Wynne believes that it is essential for unlicensed operators to be forced out of business. But enforcement can only go so far in eliminating the black market, so making licensed businesses more competitive also needs to be a part of the solution. To do that, he said, at least one layer of the state’s high cannabis taxes should be repealed.

Even with other taxes, regulatory fees, and the expense of lab testing to ensure product safety and potency, Wynne believes that with some tax relief, licensed operators would be able to compete with the illicit market.

“We definitely have the economy of scale. We definitely have efficiency,” he continued. “We have the capacity to produce a better product at a lower price, but not when we’re facing, functionally, a 25- to 65-percent effective tax rate.”

“The truth is, the cannabis black market will continue to exist as long as there’s a significant price differential,” explained Wynne. 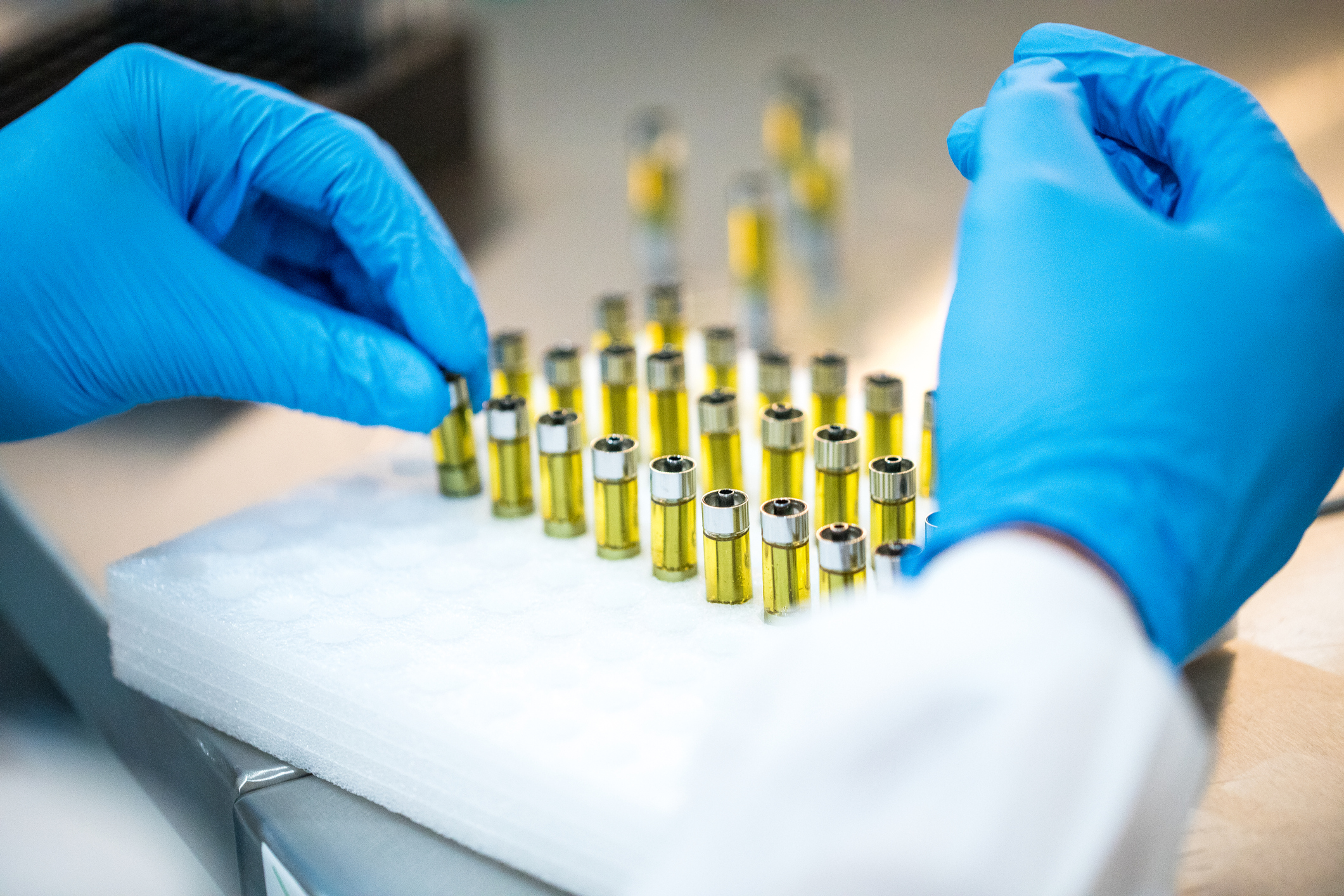 Ly of Bloom also believes that the proliferation of illicit operators must be addressed in order to ensure the safety of cannabis consumers. But he suggests another tactic: bringing them into the fold of licensed businesses.

“How do you open up the market to prevent the black market?” he asked. “How do we let more people into the market? Keep those quality standards, keep those safety standards high, but how do we figure out ways to let other people in?”

Cannabis manufacturers and retailers aren’t the only companies that had to adapt to the EVALI crisis. Cannabis testing laboratories and the firms that supply them, including Emerald Scientific on California’s Central Coast, also had to react to the crisis.

“I think there’s an understanding in the industry that we need to come together to apply good science, and we need to work hard to determine how we can deliver this product in a safe and efficacious way to the consumer,” explained Wes Burk, Emerald Scientific’s president.

Throughout the cannabis industry, companies were soon looking for a way to detect vitamin E acetate in the products they were purchasing, but no such tests were being offered yet. Labs and their suppliers had to fill the void and develop new processes and products to test for the newly-suspect additive.

“We had to scramble to come up with vitamin E acetate reference material so the labs can do the appropriate testing when looking for tocopherol acetate,” Burk told MERRY JANE in a phone interview. 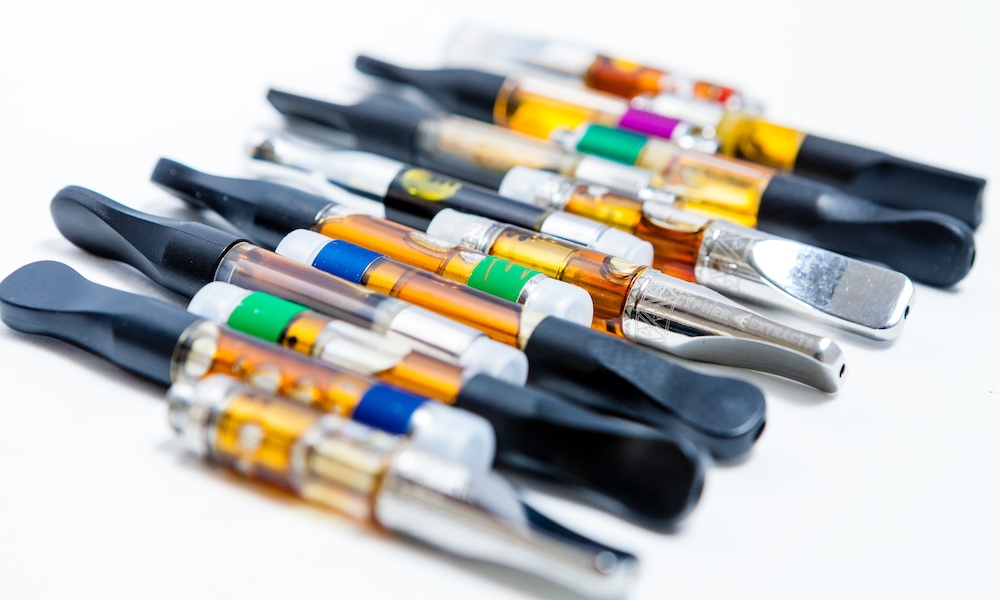 Could There Be More Than One Cause of the Crisis?

Most licensed companies that manufacture vape carts are now testing their products for vitamin E acetate to ensure the public that they are safe. But the CDC, while labeling the additive as a potential toxin of concern, has acknowledged that there could be other causes of EVALI, as well.

Burk believes that there “absolutely” could be other possible causes of the lung injuries, such as heavy metal contamination from vape cartridge hardware. Other contaminants including pesticides, mold, and fungus can also cause respiratory illness and are commonly found in black market products, which don’t undergo lab testing.

“This is where I think the subject gets really interesting,” he said. “Certainly, the hardware is being looked at pretty aggressively. A lot of the cheaper hardware is coming out of China, and it’s being discovered that lots of it contains a variety of different heavy metals that can be problematic, and some of these compounds react with cannabinoid extracts. The concentrates and the terpenes specifically, because they are technically solvents, have the capacity to leach the metals out of the hardware. So, that’s definitely one of the areas that are being looked at.”

“Less talked about, and probably just as important, are the degradation products from vaporizing cannabis concentrates and terpenes,” including the known carcinogens methapyrilene, benzene, and methyl vinyl ketone, although in lower quantities than when cannabis is smoked. 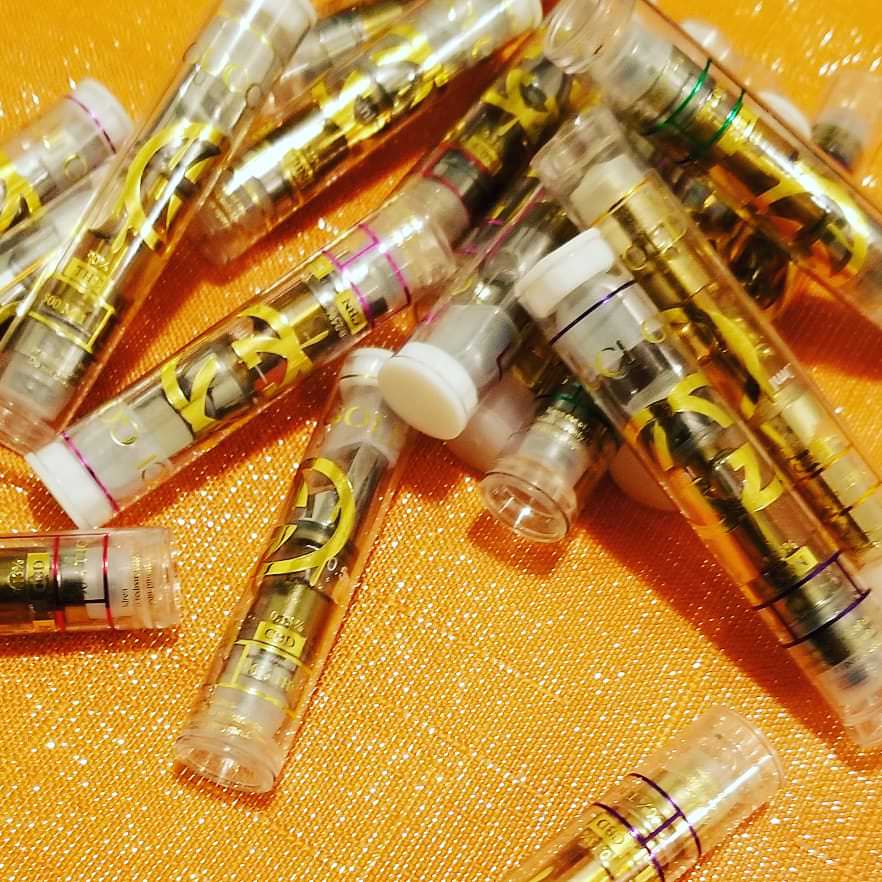 As investigators continue to search for the cause or causes of EVALI, and cannabis companies work to ensure the safety of their products, the outbreak, fortunately, appears to have begun to subside. Although some reports of lung injuries associated with vaping are still being provided to the CDC on a weekly basis, the agency says the rate of new cases is on the decline.

So, how should cannabis consumers protect themselves from contracting EVALI? Both the CDC and the Food and Drug Administration recommend that people not use vape products containing THC, particularly from informal sources. Health officials in Canada, where legal vapes have been available since last month, are also advising against their use. The cannabis industry insists that if you ensure that you’re purchasing lab-tested products from licensed sources, you should be safe.

And to this day, smoking pot has never killed anyone.

Crisis Response: How the Cannabis Industry Is Reacting to Vaping Lung Injuries