The weed-laced Nerds Rope saga may finally be coming to an end.

On Tuesday, the Monmouth County Prosecutor’s Office announced that 24 individuals across six New Jersey counties were charged in connection to the illicit weed candy ring, which operated nationwide.

“Colorful and sugary candy like what we seized are among the best-selling edible pot products on the black market,” Prosecutor Christopher Gramiccioni said during a press conference while holding up a bag of faux Sour Patch Kids. “Counterfeit candy is making the rounds, and they constitute an extreme danger to our community, particularly the children.”

The year-long investigation into the alleged ring, dubbed “Operation On the Ropes,” turned up 21,000 packages of candy, 1,100 pounds of weed, and more than 6,500 candied vape carts loaded with THC, NJ.com reported. The seizure’s total street value: $2 million.

In addition to the drugs and paraphernalia, authorities seized over $10 million in assets,  including 21 high-end luxury vehicles such as Lamborghinis and Ferraris. 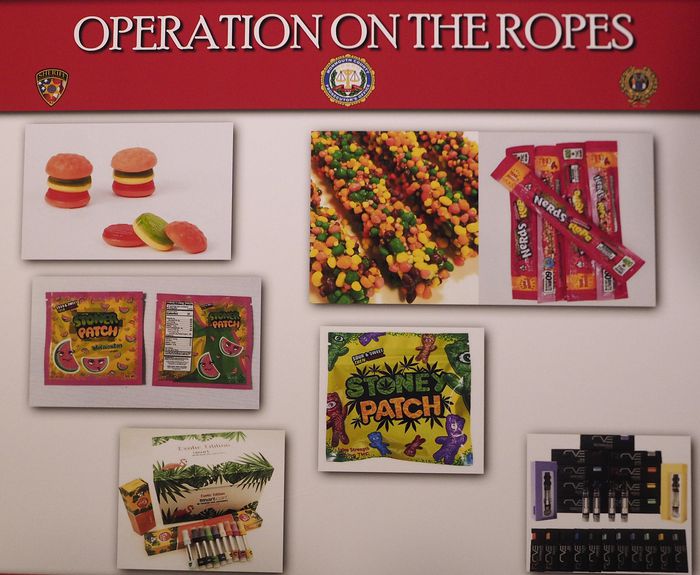 While marijuana edibles are legal for recreational use in 11 US states, and medical use is legal in nearly three dozen, all cannabis-infused products must be processed, packaged, and distributed by licensed vendors. Although there have been no reports of anyone getting severely ill from the infused Nerd Ropes or Sour Patch gummies, the ring should’ve been busted up for its faulty manufacturing processes alone: THC was sprayed on the candy rather than infused directly into the confection.

Spraying THC on candy has been largely been abandoned by the regulated, licensed cannabis industry. Spraying THC not only unevenly distributes the cannabinoid on the candy, it does so with inconsistency, since heat or touch can rub off or otherwise remove THC from the edible. Consistent dosing is already tricky with edibles, but when THC is only sprayed on the foodstuff’s surface, consistency becomes nearly impossible.

However, underground dealing of vapes and unlicensed products should concern the public and the cannabis community at large. Although health officials are still investigating the vaping crisis’s causes, authorities suspect that black market vape pens may be responsible for causing EVALI or VAPI, a mysterious lung injury that has hospitalized thousands of people and killed over 50 over the past six months. Whether the Nerds Rope ring’s vape pens contributed to the EVALI outbreak has not yet been determined.