Over the past decade, V Syndicate has elevated the stoner experience — full stop. Their accessory innovations, such as the Grinder Card and it’s ever-expanding line of Rollin’ Trays, make smoking weed more convenient than ever.

In addition to partnering with cannabis icons on the order of Snoop Dogg, Cheech and Chong, and Wiz Khalifa, V Syndicate has created expressive product lines and reconfigured essential smoking tools into objects of ever-improving convenience with cutting-edge style. Considering how complicated everything in the world is these days, it’s nice to know that smoking weed can remain a laid back, simple affair.

In fact, ashtrays, storage containers, and (especially) rolling trays have never been the same since V Syndicate got into the game. This company finds new ways to make accessories more apt for the modern-day stoner.

A cornerstone of V Syndicate’s huge success is due to their product lines that feature stoner favorites, such as Alice from Alice in Wonderland, Rick and Morty, Van Gogh, and the company’s best-selling reefer rep to date: Einstein.

Tom Scharf, CEO of V Syndicate, took some time to talk to MERRY JANE about the company’s history, its high points, and what the future of smoking accessories might look (and work) like. 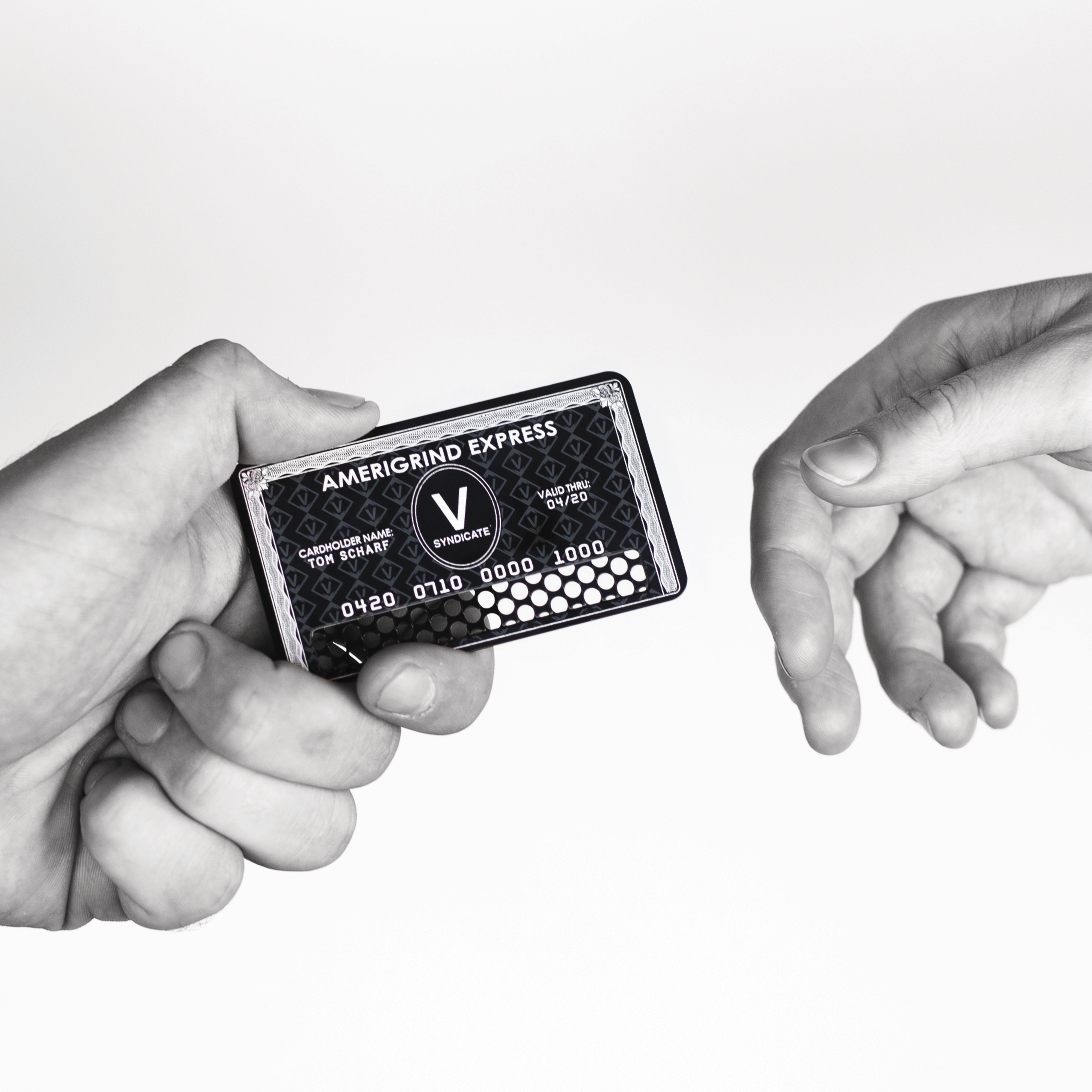 MERRY JANE: V Syndicate launched in 2010 with the invention of the Grinder Card. Can you take us through that?

TOM SCHARF: Sure. In 2010, I was living in Canada with my then-girlfriend. I had a small business there, nothing to do with cannabis. We were both cannabis smokers. I’m from Israel, she’s from the U.S. We didn’t have our smoking accessories there. Then, I saw that my girlfriend was using a credit card to grind her weed. She would grab a nug and just rub it across the numbers on the card, and it would break [the weed] down pretty well.

I thought that was really cool. I had never seen anybody do that. So I thought, we can actually make a viable product out of this. We just needed to make the card look more legitimate and be more sturdy, and that led to the concept of a stainless steel version of it. That’s basically how it came to be.

Two months after that, we were in L.A. at Hemp Con, doing our first show. That was September 2010. We saw how consumers reacted to it. It was the hit of the show. And this was just kind of a prototype version, but the concept was definitely a winner. We applied for a patent and got it, and that’s how it happened.

How did V Syndicate expand from the Grinder Card to Rollin’ Trays?

While we were just doing the card, we were very busy with IP protection and we’d done some licensing. We had licenses with Snoop Dogg, Cheech and Chong, and Wiz Khalifa at one point. We had really cool stars, but then it kind of plateaued.

We realized the Grinder Card is a cool concept for a lot of people, but it became more of a cool giveaway product. At the end of the day, it’s not a real substitute for actual grinders. Still, it was a great run for six or seven years, and then we decided we needed something else.

Going into 2017, I had split with my girlfriend and bought out her share of the company. I decided to branch out, try something different, and our distributor in Europe came up with the idea for the trays. He said it would be a great SKU to add. I was kind of skeptical, thinking it was something I’ve seen before, it’s not something very innovative, but I gave it a shot. We made a small line of trays and I was surprised how well they caught on.

Sometimes, it seems like cannabis users can undervalue the role of a great, dependable rolling tray. How was V Syndicate able to address that issue and convince smokers that a great tray is necessary?

In 2017, the market was pretty flat. There were just a couple of brands and they were pretty boring. Consumers didn’t have a lot of options. We tried to make trays into more of an art form — to make them more of an expression for us and for our customers. Each tray is meant to be an art piece and the public responded very, very positively. 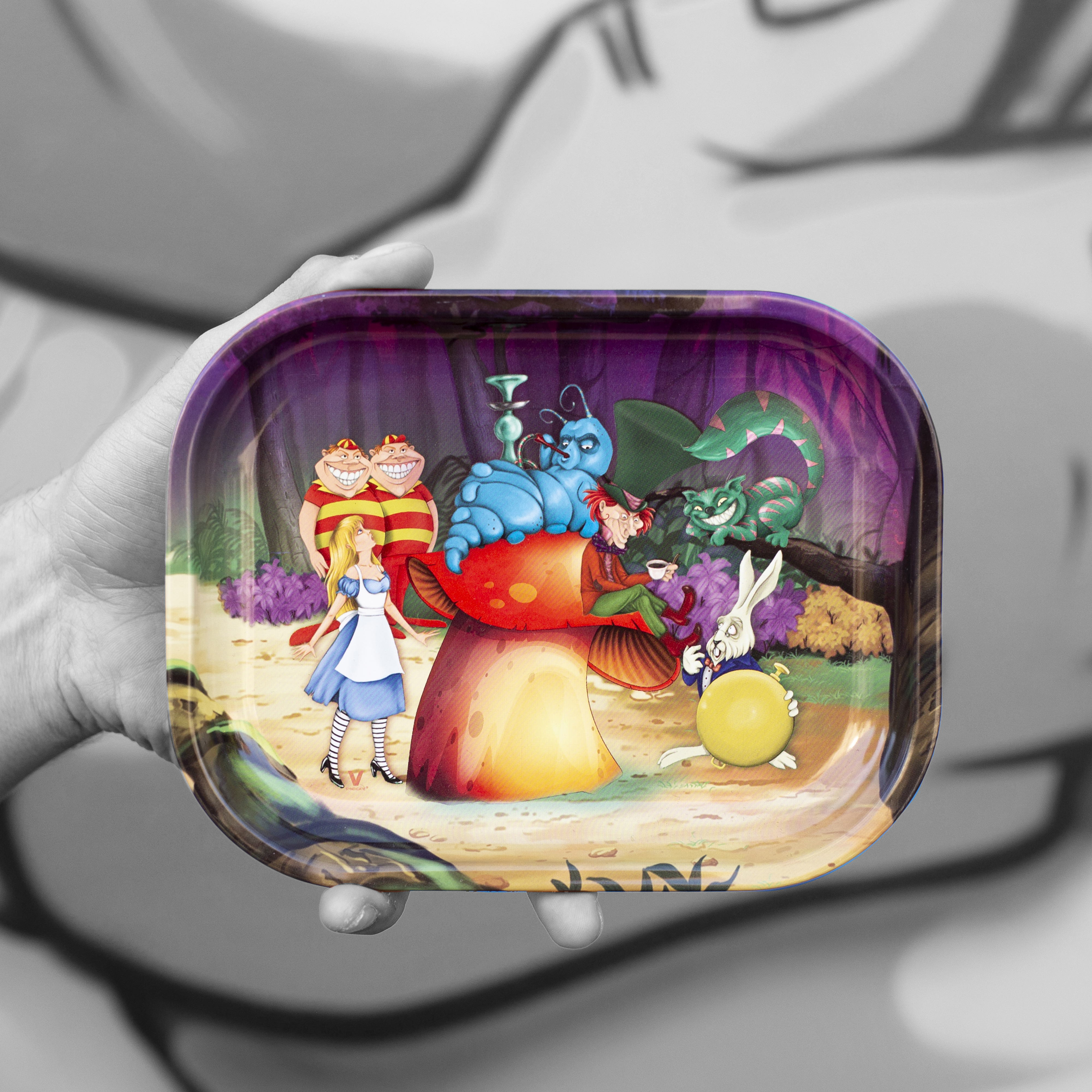 Please take us through the special features and advantages of each of V Syndicate’s Rollin’ Tray lines. Let’s start with metal rollin’ trays.

The metal line is pretty straightforward. We didn’t reinvent the wheel here. We made sure, and continue to make sure, that we use good quality steel with the right thickness. We pay a lot of attention to detail when it comes to the graphics. We make sure they’re high quality, and we run samples beforehand to make sure it’s clean.

A big part of it is the packaging. We make sure it’s beautiful, which encourages the retailer to display it, and we make sure it has our branding marks on it. We make sure it looks like a legitimate product because a lot of other trays are kind of cheap, off-brands — and they look that way. We take it the extra step. 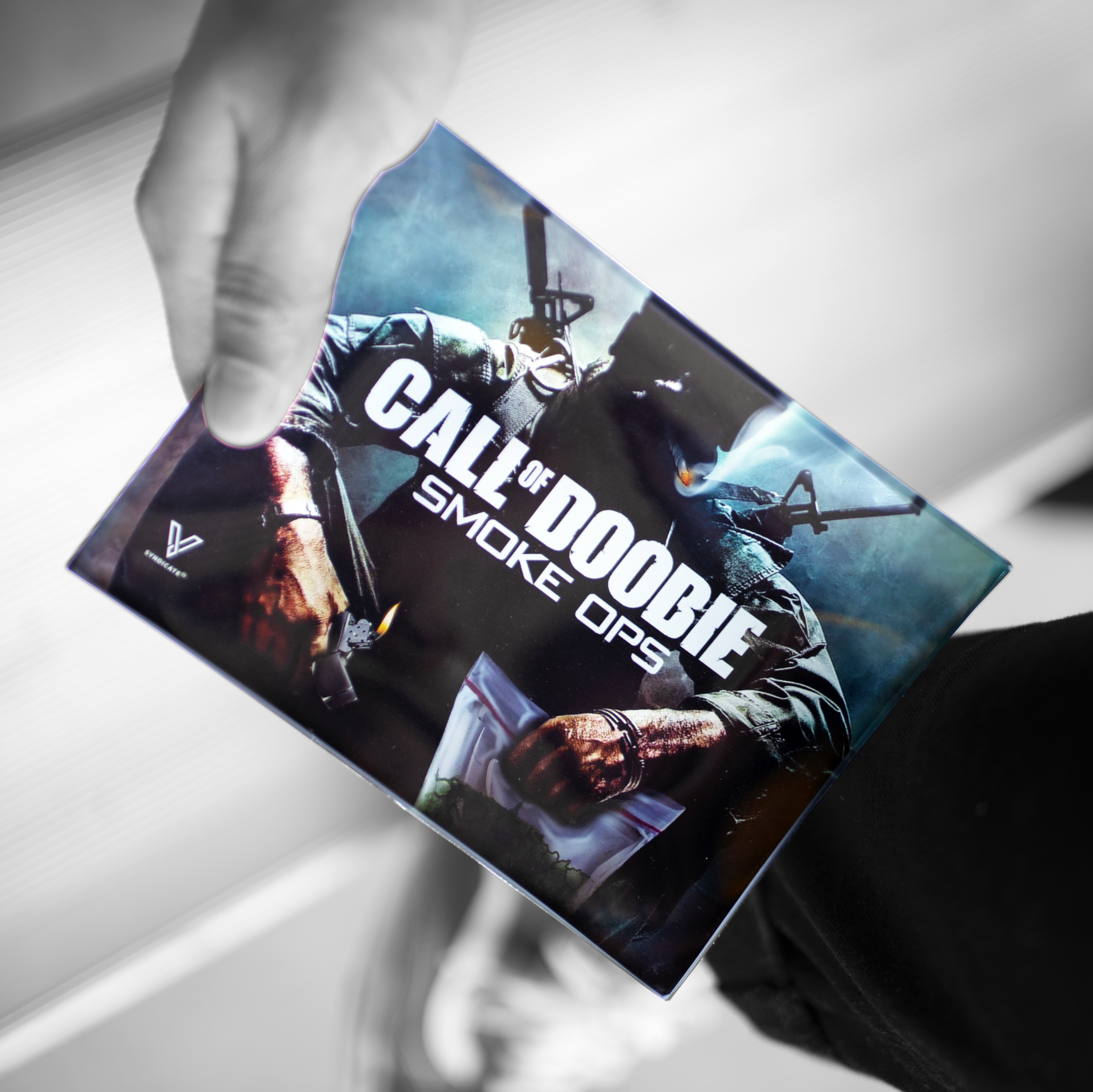 How about the shatter-resistant glass rollin’ trays?

The glass rolling trays started about two years ago. I noticed how much people who smoke like to use glass. It’s easy to clean, and it looks good with your glass pipes and bongs. Stoners love glass!

So, as far as glass rolling trays, there was almost nothing available that was also affordable. So, I aimed to make the quality of our glass trays equal to our metal [trays]. Design and functionality are everything. But, we also had to make sure the glass was sturdy.

People like the metal trays because you can drop them, and they don’t break. So, we went with a shatter-resistant glass, which is similar to how they make phone screens. It’s not shatter-proof — if you drop it from 10 feet it could shatter. But the glass is still pretty hard.

The high quality print and sturdiness of the material we use instantly proved to be a winning concept. And, we’re able to make sure these tays are affordable. Our small glass rolling trays go for $15 to $20, our medium-sized line goes for $20 to $25. They’re priced to be accessible to everyone — or, at least most people. 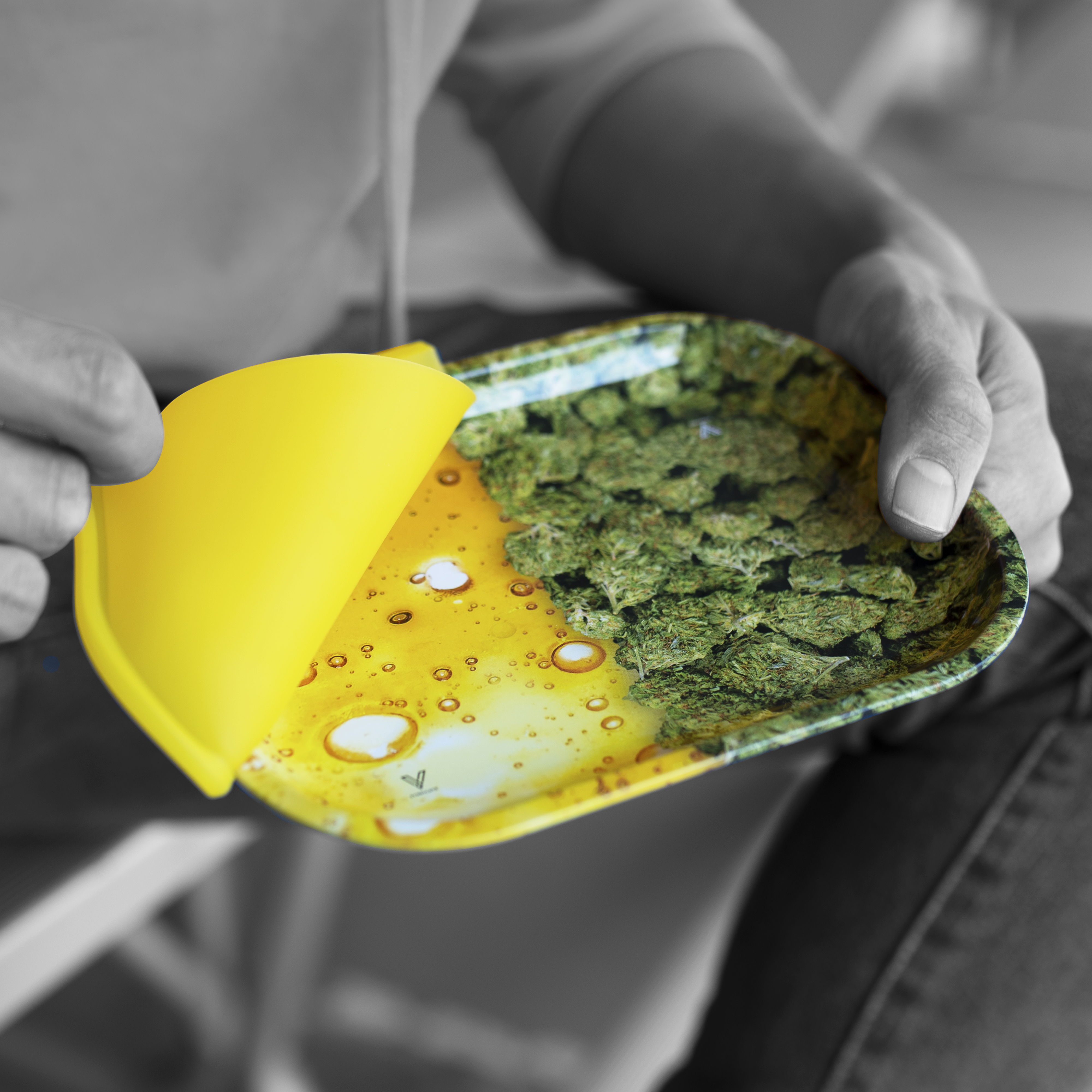 For the hybrid rolling trays, we were looking to cater to people who like to smoke oil and flower, so we combined silicone with metal.

We work a lot with silicone. We have a product called a Dabit Card. It looks like a Grinder Card, but instead of a grinder, it has magnetic dab tools. We use a silicone pad to cover over the tools, which keeps them clean, so you can just put it in your pocket or purse without getting everything sticky. 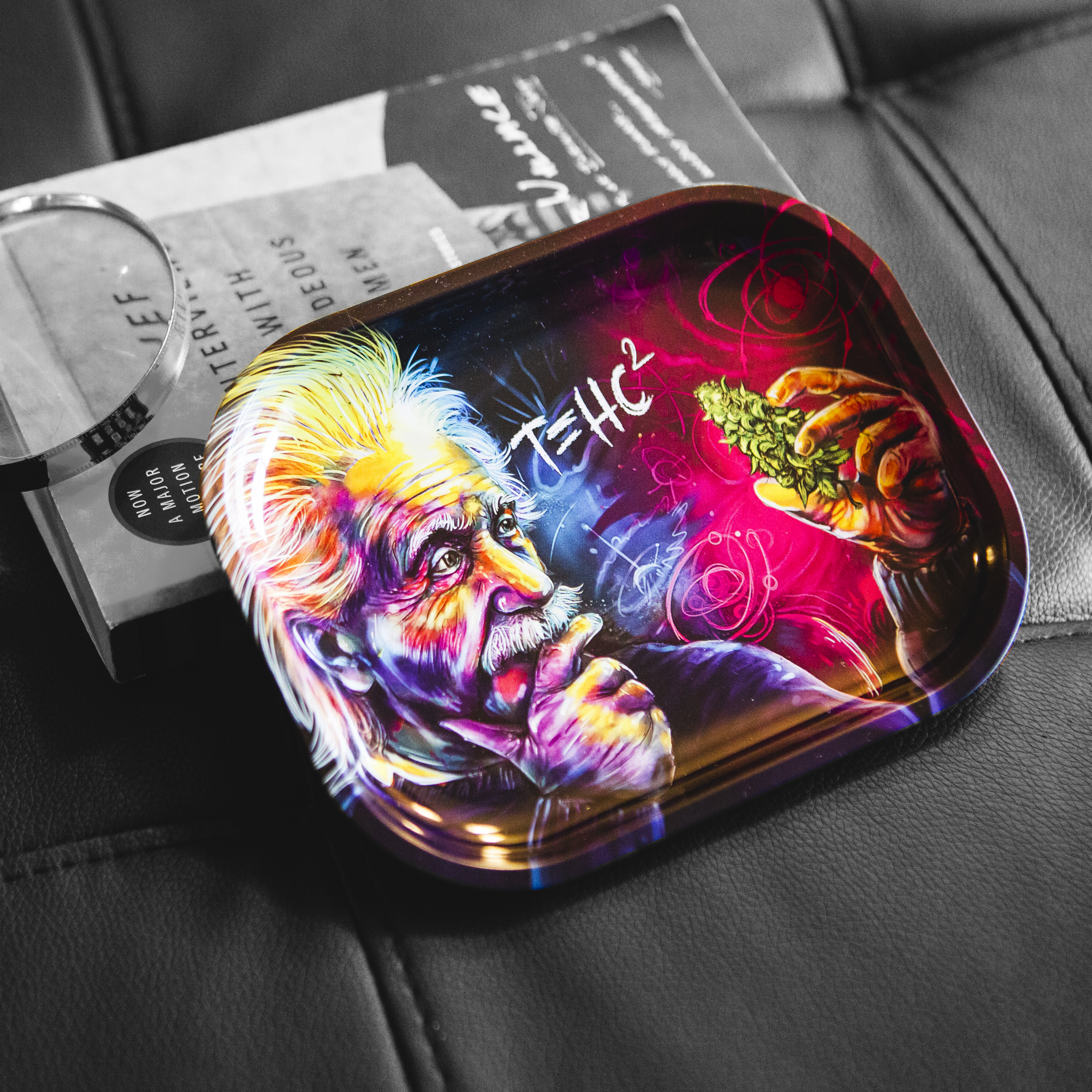 We love V Syndicate’s character-branded lines. What images are most successful for you?

Probably the Alice [in Wonderland] characters. They’re very popular, and we just came out with two more versions of them. Alice has been really killing it for us! Our all-time number-one, though, is Einstein. I think that has to do with Einstein being such an icon among stoners and associated with positive things, like mind-expansion. We also really focused on the colors with Einstein. Color is a big part of our designs, we work hard to make them vivid and engaging.

Tell us about V Syndicate’s new focus on marketing directly to consumers. What has that change entailed? What have been some of the results?

Over the past year-and-a-half, we really started focusing on our online presence and we started selling on Amazon. Business-wise, it’s great to sell to consumers because the margins are higher, but even more than that, it creates a demand in the market. It’s kind of like getting the word out about the brand through the backdoor.

When focusing on selling to businesses, you hope for a trickle-down effect. You have to go through the distributor, then the store, and then finally the consumer. Even if you have an amazing product, so many things can go wrong — issues like distributors prioritizing another project over yours, or stores not having the right space to display the product and it ends up just getting buried with some of the other brands.

When you deal directly with the consumer, you create an organic demand. The consumer will go to a store and ask for your product, and then we get the demand from the stores and the distributors. So, it’s really about strengthening your brand from the ground up. It’s a great way to do business.

Finally, what’s next for V Syndicate?

We’ve been working on some grinders and some storage items, and we’re probably going to do some smoking accessories, too, like pipes. We’ll be expanding our lines by adding more categories and more products to our portfolio. And, as always, coming up with innovative designs!

* This was made in partnership with V Syndicate